ACESSS FROM GRESSONEY-LA-TRINITÉ
Starting from the town of Gressoney-La-Trinité, continue for about 4 km and you will reach Stafal, where the paved road ends. The lift to Colle Bettafora, at an altitude of 2,680 m, departs from the parking lot. First a cable car, and then a covered chair lift (approximately 30 minutes) carries passengers to the beginning of path number 9, indicated by a yellow marker.
The first section of the path, until Colle Bettolina at 3,100 m, is very easy. It then becomes little bit steeper and travels through a stony deposit, ending in a cairne on the ridge. From the beginning of the season until the end of July this path is usually covered with snow, but due to the influx of hikers, the path is usually well worn.
The last section consists of an open ridge (30-40 minutes), but it is well equipped with a fixed rope for tying in.
The total journey to the refuge takes 3-4 hours for average trained climbers.

ACCESS FROM AYAS
From Ayas, the refuge can be reached entirely on foot or by using the ski lifts or 4x4 taxi service to Colle Bettaforca (2680 meters). From Colle Bettaforca the path is the same for everyone.
If arriving on foot from the village of Saint-Jacques, take the path to Resy, right behind the church. From there, continue on the farm road to Colle Bettaforca, with an average journey time of 3 hours.
With the lifts, take the Frachey-Alpe Ciarcerio funicular, then the Alpe Mandria chair lift. At this point it is necessary to walk about 15 minutes to the departure of the chair lift that leads to Colle Bettaforca.
With the 4x4 taxi you can leave the Saint-Jacques village and arrive at Colle Bettaforca in about 35 minutes.
When you reach Colle Bettaforca at 2,680 meters, follow the path number 9, marked by yellow trail signs. The first part of the path, until Colle Bettolina at 3,100 m., is very easy. Then the trail becomes a bit steeper, proceeds through rocks and leads up to the ridge. From the beginning of the season until the end of July this part is generally snow-covered but given the influx of hikers the track is usually well-trodden. The last stretch includes scaling a cliff (about 30-40 minutes), but it is well equipped with a fixed rope to secure yourself to.
The total journey to the refuge takes 3-4 hours for average trained climbers. 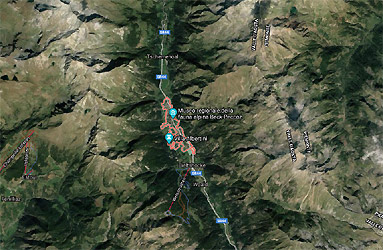 How to reach
Gressoney
Details 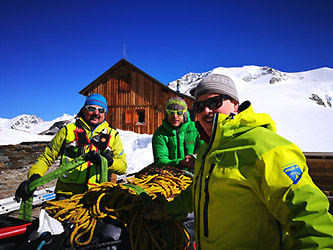