The hut Quintino Sella at Felik

The Quintino Sella Refuge, opened August 29 1981, can accommodate a maximum of 142 mountaineers. Located below the Colle del Felik, it is situated on a plateau and is the perfect starting point for the ascents of Castor, Polluce, the alpine ascent of the Eastern Lyskamm and the crossing of the Western Lyskamm.

The complex is comprised of three buildings: the home base of the Quintino Sella Refuge, the outer structure which houses the bathrooms, and the "old Quintino Sella Hut" which, partly restructured, is used as winter accommodation and as the refuge’s storage area, with about 25 beds in case of emergency.
The Refuge, named after Quintino Sella, founder of the CAI (Italian Alpine Club), is divided into three floors.

The first floor, where the mountaineers can find the large entrance with space for their equipment, the restaurant, and the bar where meals are served and breakfast is prepared.  The second floor is divided into rooms, each of which contains eight beds.  Finally, the third and top floor, which offers a splendid view over the Lyskamm Nose, and is used as a dormitory with single beds and bunk beds. 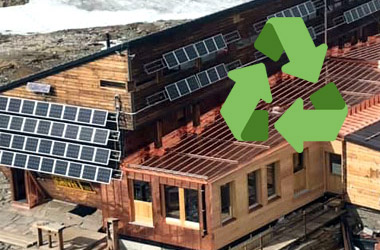 The Quintino Sella
is Greener
Information 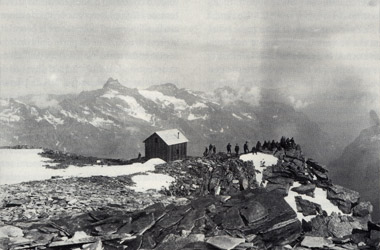 The history of
Quintino Sella
Information